skip to main | skip to sidebar

Domestic Violence and the World Cup: a Myth is Born

Yet another campaign against domestic violence. Here we go again. What have they come up with this time? A string of photographs of celebrity men wearing T-shirts printed with the legend "I'm a real man" and, er, tiaras and butterfly wings and, yes, rose tinted glasses, courtesy of Cosmo, that bastion of unbiased and in-depth reporting. Sigh! Am I the only one who gets creeped out by this sort of thing?

But wait, the caption under the second photo says this: "Research has shown that big sporting events such as the World Cup can result in increased rates of domestic violence. During the 2006 World Cup, reports of domestic abuse increased by nearly a third (30%) on England match days." That's a new one, but it does sound sort of familiar. Ah yes, that "noble lie" of the bloody massacre of American womanhood every Superbowl Sunday (yes folks, that's a Snopes.com link).

Poking around a bit, I find the World Cup version has got around a bit already. The numbers are mostly between 25% and that "nearly a third" from the Telegraph, but the BBC goes as far to say that the Greater Manchester Police think it could be as much as 1000% (yes three zeroes) as it tells us about a poster campaign (football shirt with "strikeher" written on the back, geddit? Oh never mind) with a photo of yet another celebrity, but they got the year wrong: 1996, which wasn't even a world cup year. They get the year right and are a bit less hyperbolic in an earlier article but Auntie Beeb wants to be very sure that all you nasty boys will behave on match days, the white knights in their uniforms and wigs are just lining up to teach you a lesson.

A Google News search shows up a whole slew of local papers singing the same tune and, what's this? Physorg.com? They're a pretty serious bunch, and they're at it too. (But how carefully can they check up on the 100+ articles a day they publish?) They even quote a (female) professor who studies domestic violence. Then it must be true, right?

Well, not quite. But like all the best lies, there is a thread of truth. Maybe. Well, in fact, I don't know, and I'll bet no-one else does either.

I found the "Home Office report" they're all getting this from. Not on the Home Office website. I tried, but, well, it's not apparently designed to give you anything really useful. I found it here (pdf) , on a website dedicated to tackling domestic violence in the LBGT community, of all places. It's called "Lessons Learned from the Domestic Violence Enforcement Campaigns 2006", and it's appalling. In fact, it's embarrassing. If this is the quality of "research" that was put out by the Labour government, well let's just say that the Tories and Lib-Dems can't do any worse.

It's signed by ex-MP Vernon Coaker and ex-Attorney General Patricia (Baroness) Scotland. Well, at least they're gone. But of course we can be sure they didn't actually write it. Whoever did write it knows how to handle typesetting software, but otherwise that's about it. But anyway, what did they do? They carried out two data collection exercises involving 46 and 56 "basic command units" (BCU) spread around the country. Remember those numbers, we'll come back to them. I'm guessing that a BCU is jargon for a police district. Each exercise is called a "Domestic Violence Enforcement Campaign" or DVEC (no, they didn't go around forcing people to commit domestic violence, be quiet at the back). These doubtless expensive campaigns appear to be justified on the basis of one short academic article finding a link between sports events and domestic violence (you can read it here, the registration's free -but I ask you, since when did Brits start calling football soccer?). The two data collection periods are called DVEC 1, which took place over February and March, and DVEC World Cup, which took place over June 2006 to coincide with the beautiful games. Note that the first was twice as long as the second, another important number.

They're careful to make sure we know what they mean by domestic violence, and they're pretty inclusive:

Any incident of threatening behaviour, violence or abuse (psychological, physical, sexual, financial or emotional) between adults, aged 18 or over, who are or have been intimate partners or family members, regardless of gender and sexuality.

There's a lot of blurb, but eventually you'll get to section 9 where the meat starts to appear.

But what's this? Figure 9.1 charts the number of incidents recorded per 1,000 population in DVEC 1 in each BCU. But, er, the range of numbers goes from 100 to 700. Per 1,000. That's as much as 10% to 70% of every man, woman and child in the district. That can't be right. Even if they're all repeat offenders, with a guess at once incident per month, and they mean per 1,000 potential perps married men, then that's still as many as 35% of them were naughty over those two months. I don't buy it. 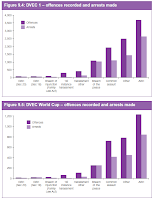 Then there are Figures 9.4 and 9.5 showing the number of offences, broken down by type, recorded in DVEC 1 and DVEC World Cup. The distributions look about the same but again, look at the ranges of data. DVEC 1 goes up to 4,000, DVEC world cup goes up to 1,200. DVEC 1 was twice as long as DVEC World Cup, and used 46 versus 56 BCUs. It's pretty easy, but I'll do the math for you: that means approximately 44 ABH (actual bodily harm) incidents per month per BCU in DVEC 1 and 21 incidents per month per BCU in DVEC World Cup, and the other incident types follow similar proportions. Uh-oh. Do you see what I see? The rate of incidents during the World Cup period is about half of that of the control period. Well well well, perhaps the World Cup is actually good for controlling domestic violence!

But we still haven't got to the bottom of the myth yet. That's to be found in Figure 9.6 and Table 9.1 below it. Nice and neatly we have laid out what are claimed to be the "Number of recorded incidents on each major match day of the World Cup Finals against the average number on the same weekday recorded during DVEC 1 where BCUs recorded activity in both campaigns". Now read carefully here, they say "where BCUs recorded activity in both campaigns", that presumably that only regions who collected data in each campaign were included which means that the 46:56 ratio doesn't matter.

But let's look at the chart, which does seem to show that the incident rate is higher on match days, especially 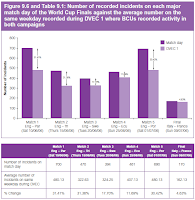 when it is considered that the overall incident rate in DVEC 1 is supposedly twice that of DVEC World Cup. But wait. There are two Sundays in there, and they are different for DVEC World Cup and DVEC 1. But that can't be right. The legend says these are the average numbers on the same weekday. They should be the same! But they're different, by about a factor of 2.5. Now isn't that odd? What does this chart mean?

My confusion becomes deeper still when I go to Figure 9.7 and Table 9.2. The legends are exactly the same, but all the numbers are different! The range of numbers of incidents is half as much as the previous figure and the difference between the two Sundays is now a factor of almost 3!

Which of these two charts are we to believe? And what are we to make of the numbers for Sunday? THE DATA DON'T MAKE ANY SENSE! Well, frankly, I don't think I'm going to believe any of it and the raw data isn't available to check. If anyone finds it, do let me know, I'd love to do a proper analysis and see if we've got anything more than a bunch of made up numbers for political purposes. This is an important issue, and the authors of this rubbish ought to be ashamed of themselves.

To polish things off, I'll quote the conclusion:

"The data collected during the World Cup DVEC is supportive of the previous research linking major sporting events to increases in violent crime and in this case domestic violence. Major sporting events do not cause DV, as perpetrators are responsible for their actions, but the levels of alcohol consumption linked to the highly charged emotional nature of those events seems to increase the prevalence of such incidents."

Well, if cause-and-effect is a real phenomenon, and if you can link major sporting events to increases in domestic violence, then I'm afraid you would actually have to say that the former do indeed cause the latter, but it is not at all clear that they have linked major sporting events to DV. What they have done is create a snow job of misinformation. If the link is present in the original data, we really have no idea at all. Of course, that doesn't stop the media from going all loopy over bogus numbers and pumping the misandry for all it's worth.

There you have it, gentlemen, a new DV myth in the making. Enjoy your World Cup.
Posted by John Doe

The quotes from the celebrities in the real man campaign are rather weird.

We who work in the industry, if we think about it know that the whole thing is a lie. Ask any Family Solicitor, barrister or Judge whether their experience matches up with the popular perception. The fact is it won't because the popular portrayal doesn't exist in reality. it doesn't stop them though.

Tracing the references to sport related DV through the studies (from the Home Office report) finds the following study:
http://www.ncbi.nlm.nih.gov/pubmed/1419925
American Football, and for one team, and the asbract HYPOTHESISES that DV increases, given the increase in admissions to an Emergency Department. Seems that from teh abstract, no one considers that the women might also get drunk, and get into fights/ accidents (they've clearly not been to my home town).

I was impressed by all the research.
Its refreashing for someone to clearly post why they think domestic violence increase due to sports tournamants is bogus, and have so much information and links to back it up, rather than producing a huge rant without any concrete evidence for or againt what they're talking about.

It was very interesting, and very helpful.

This is not intended to be an anti-feminist blog, nor a reactionary fathers' rights blog. I just want you to think a little about some of the ways that men and particularly fathers are treated these days. Most of all, I want my son, but I doubt there's anything you can do about that.

The blogroll will be back soon. To contact me personally, leave a comment, and tell me not to publish it. If you want a reply, leave an email address.